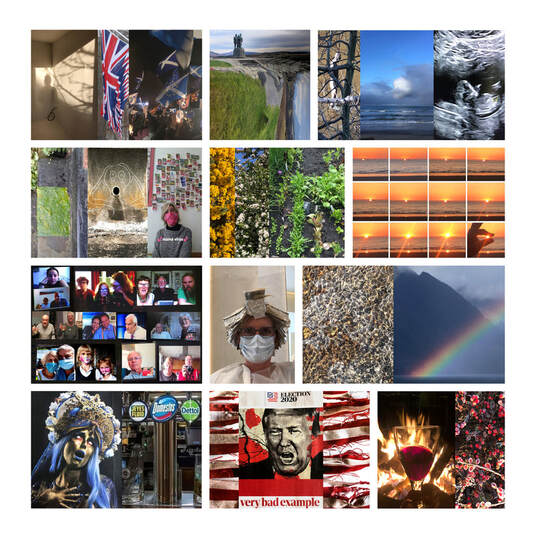 ,
The annual Portobello Book Festival 2021, 1st - 3rd October was organised and held against the backdrop of the Covid pandemic. The organisers sent out a request for writers based in Portobello to submit work related to their experiences of the pandemic. The published collection was called, 'Pandemic Portobello'. I submitted the image above, and the written diary below. Given the limited financial resources of the festival, I wasn't entirely surprised that there was no way my visual work could be included. What did surprise me was the fact that the committee were happy to include the written part of the work which they felt stood by itself. Below is the entire piece.

January
The shadow of a labourer, cast by early morning winter’s sun on a building site wall. 31:01:20, 10:30 am, Parliament Square, London preparations for the Brexit celebrations. Edinburgh 11:30pm, Remain and other European flags outside Holyrood Parliament buildings in protest at our exit.
February
The pandemic was on its way across Europe and we travelled around Scotland to visit friends and family. The Commando War Memorial near Spean Bridge. The ‘panorama’ function of the camera mistakenly turned ninety degrees when halfway through process. Our world was about to drop off the edge.
March
An Anthony Gormley figure standing in the Water of Leith, Stockbridge, in the pale afternoon light.
A portentous cloud over the Baltic Sea sent by friend, Simon Dale from his ‘quotidian’ blog site.
The first sighting of, 'Child' who was conceived, carried and born with much attendant joy, in this our Covid year.
April
The first six weeks of lockdown would bring out a variety of creative responses sent between friends.
Leaves soaked in water and stuck to a doorstep in Leeds.
Graffiti drawn round an outflow pipe on the Portobello sea wall.
Barcelona, a mural of Mum’s bad habit.
May
Spring was sharp clear and prolonged by a continual Polar Atlantic airflow. The Scottish Spring can happen within a week. In 2020 it went on for over six weeks. Lettuces struggled to grow but nothing could stand in the way of the flowering of the gorse and hawthorn.
June
Our disrupted lives tied us closer to the sun. Awakening at dawn and retiring at dusk. That clear, persistent, polar air gave some wonderful dawns on Portobello beach. 04:35 hours 21st June
July
The iPhone, the laptop, television, Skype, texting, What’sApp, e-mail and Zoom, all became the norm of information and social intercourse.
August
A tentative re-entry back towards ‘normality’. In Tania’s self-portrait she looks more like an armed knight than someone having a haircut.
September
We enjoyed a brief escape to Skye. A shallow stream of clear water rippling over a bed of limestone shell fossils.
A rainbow over the southern end of the Cuillin Ridge seen from the Elgol Peninsula.
October
A Rachel McLean image from a former Venice Biennale, found in one of many lockdown inspired, ‘big clean-ups.’ For me she will always be, ‘Our Lady of the Virus’.
A parody of Trump, Twitter-advice from the social Internet.
November
Vile, disturbing and yet wholly compelling, the US Elections.
December
This would be the new form of socialising for the foreseeable future. Outside in the dark and cold, socially distanced, sitting around the fire-bowl with drink. The first frost and snow of winter on the cotoneaster.
(Thanks goes to: Simon Dale; Rachel McLean; the Guardian Weekly and to whoever put the 'Trump medical advice' on the social media; for the inclusion and use of their imagery)